2D platformers are one of my favourite genres of games, there is so much scope for unique mechanics to be thrown in and in recent years we have truly been spoiled with a plethora of greats. This means that those teams which once ruled the roost are no longer a big fish, they are now in a gigantic lake. Surrounded by other fish, with huge teeth and fins and some of them are holding harpoon guns. Point is, it is more competitive than ever to make your 2D platformer stand out.

The team behind Banjo-Kazooie are back with Yooka-Laylee and the Impossible Lair and not only that, but they certainly have something to prove as the newly formed Playtonic Games studio. Hot off the heels of 2017’s Yooka-Laylee which was greeted with lukewarm reviews, probably due to the massive expectations of the developers’ pedigree. The sequel however, does not have such a weight to bear, and this might be the reasons that this is one of the year’s biggest surprises.

I like Yooka-Laylee and the Impossible Lair a lot more than I originally expected to.

Simplicity is Bee, I Mean Key

So, the game starts out pretty simple, there’s a big bad bee, Capital B, he is bad, and you should stop him before he takes over the “Royal Stingdom”. He has devised a way to control the royal bee army, the Beetallion with his new gadget, the “Hive Mind”. After a brief tutorial, Capital B calls in for “bee-enforcements” who come to kick your “bee-hind”, from there the real game begins. It is then up to you to help Queen Phoebee retake her birthright. There are a lot of puns and dad jokes in this game, if you are averse to those at all, maybe smash the X button as hard as you can when you see a dialogue box open up. I love puns, so to me at least, this is all very charming stuff. 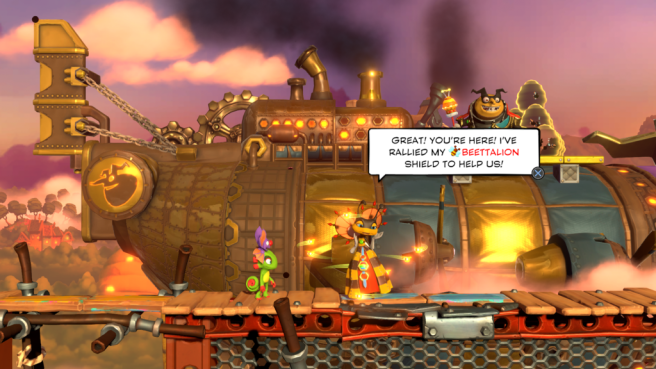 The first level of the game is actually the titular ‘impossible lair’ and minutes from booting it up you are forced to give it a go. It is bloody tough though. To conquer this task you are going to need the help of the aforementioned Beetallion. They are scattered around the overworld and at the end of each level, each bee giving you an extra hitpoint in the final level. You can tackle the Impossible Lair at any point in the game, but you will obviously have a better shot at completing the game if you have as many bees as possible to protect you. This is a really cool concept for the game, if you are good enough, you might only need 10 bees, it’ll surely lead to some nutty speedruns in the future. I guess it is kind of similar to Breath of the Wild in this regard, which is massive praise, but I don’t think I have seen another platformer handle progression in this way.

The game looks fantastic and is certainly a testament to what the Unity engine is capable of. It gets an admittedly justified bad rap, but when people who actually care are at the helm, it is a capable basis for a neat little game such as this. The bright colours pop off the background and there were rarely instances of confusing the background for the foreground as is the case with a lot of 2.5D platformers. It’s just really cute to watch, like a Saturday morning cartoon, but not the good ones I grew up with like Medabots or Zoids, the new ones that my niece watches. 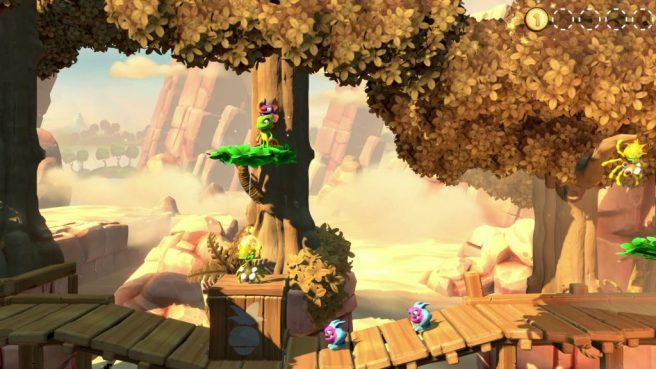 Although the designs of Yooka and Laylee seemed a little strange to me at first (I think it is the back of Yooka’s head, I’m not sure, those… horns? They creep me out. Maybe it is his hands actually, I can’t quite decide) I did eventually jive with it and the bright colours are certainly a little more refreshing. One thing that I did wish was that the minions who block your way had a little more cohesion with Capital B, or at least a plausible reason for being your foes. It is a difficult thing to explain, but they don’t seem like they would want to help Capital B, so why are they? Where did they come from? This could just be something I missed from the first game however.

A Lick to the Past

The game is split into two halves, the overworld exploration and the 2D platforming levels. The overworld is where you start out, there are mainly puzzle elements in this areas, with minimal platforming, think Zelda-lite and you won’t be far off. It is your usual affair, levers, box pushing, all stuff you would come to expect. It helps then that this world is absolutely crammed full of secrets, I had a lot more fun exploring here than I expected. To call it a level select hub is to sell it massively short, it is an integral component for the game. 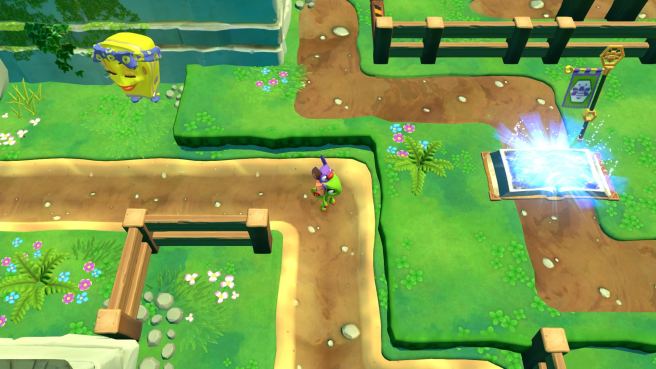 As you find hidden pathways and elemental bushes you can begin to change the state of the 2D stages. For example, freezing the water around a swimming stage will lead to it freezing over and changing the stage entirely. These aren’t just rehashed levels, they are basically new levels entirely and lets the developers double the level count in a way which feels awesome and natural. I won’t spoil the transformation puzzles for you, but they turn upside down, freeze, thaw and loads of other neat stuff. They’re all a joy to play around with. 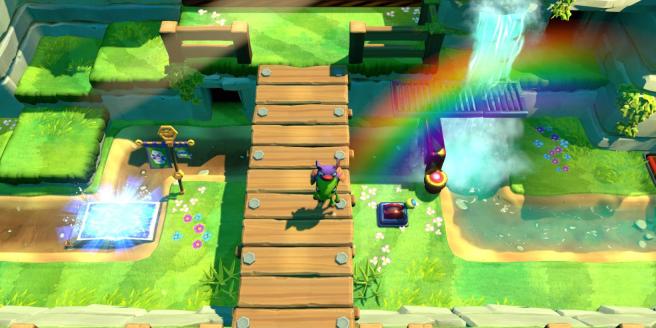 The overworld is also populated with a host of kooky characters, some of them wonderful, such as Trowzer the Snake, but a lot of them just straight up weird, like the shopping trolleys who live on the beach, or the cheese vending machine lady. This is where the pun-filled writing is found, and it makes me sick that someone was likely salaried to write this. It makes me sick because I want that job.

Once you are done playing around in the overworld, it is time for some platforming. My dudes, this is some damn fine platforming. If you have ever played a Donkey Kong Country game (another Rare property) you are going to feel right at home in Yooka-Laylee. There are the usual staples of a DKC game, rolling, vines, bounce pads, cannons, the works. Unlike DKC however, getting hit doesn’t mean you lose your partner forever. Laylee will flutter around wildly like Baby Mario from the Yoshi’s Island series and you have a brief window to get her back. This leads to some great moments where I lost Laylee and then had to make the snap decision whether to risk navigating a dangerous area to retrieve her, or push on alone, more vulnerable. With certain abilities tied to Laylee, you want to keep her around as much as possible.

The controls are excellent, a lot of work went into making Yooka feel just right. You have plenty of control over your jump arc and picking up speed with a roll and leaping through areas gives a real sense of weight and momentum. In a lot of respects, it surpasses DKC in the controls department. Even swimming is made enjoyable in this game. Now that is a merit not awarded to a lot of games. All of this is to say, it feels fantastic to play, and if you die, which you will, a lot, it is going to be your fault. So this is a difficult game, it isn’t Super Meat Boy or Dark Souls tough, but it is a solid challenge and the difficulty ramped up in the just the right ways for me. If you fail at a section multiple times, the game does offer the chance to skip to the next checkpoint, at the cost of losing out on any collectibles along the way. So I’ve heard anyway, but I’m an elite gamer and I’d never succumb to any patronising messaging as “hey skipper, everyone finds this part tricky”.

The designs of the levels themselves are great, with well thought out areas reaching genius strokes as the switching happens, it made me think of Symphony of the Night in this sense. You can be going through a platforming sequence and be like, “that was pretty awesome”, only to find in the alternate version it was just as fun upside-down. The environments are nice and varied, but there are a few too many levels composed of several houses, its strange, but you will be seeing challenges like the image below a lot in Yooka-Laylee. 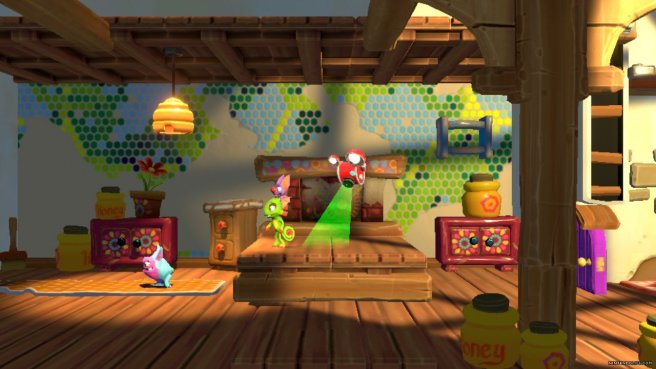 The levels, much like the overworld are chock-full of collectibles and secrets, such as the TWIT coins needed for progression and hundreds and hundreds of collectible quills used to purchase items such as visual filters like turning the game black and white, ‘big head mode’ or game changing alterations such as enemies needing to take two hits to be defeated rather than one. These coins and quills reward exploration in these sections of the game too, I’m still unsure why Yooka says “YUM” when he picks up a TWIT coin. It is just some extra challenge for those willing to seek it. 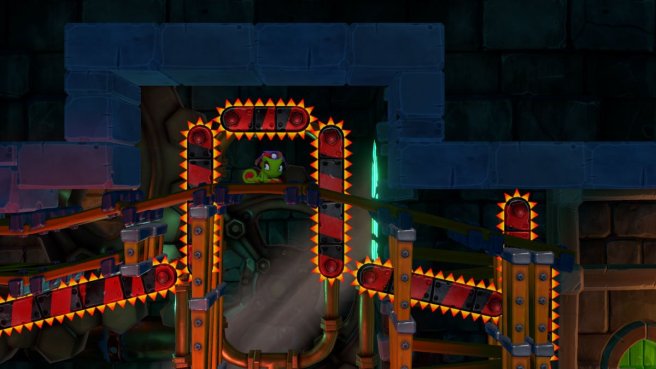 One noteworthy omission from the game is that there are no real boss fights so to speak until the final run on the Impossible Lair, in which there are several. It would’ve been nice to have some encounters sprinkled across the 12-hour campaign.

As mentioned before, this game takes great inspiration from Donkey Kong Country, this is seen with the music also. With a team comprising of Grant Kirkhope and David Wise, who worked on the original DKC, Playtonic really brought their A-game when it comes to the music. It is all enchanting in just the right ways. It gets you pumped for a chase sequence and keeps you mellow and calm whilst navigating a tricky underwater section. The music is excellent, whilst a lot of the songs aren’t likely to be as well remembered as those DKC tunes, they are fantastic nonetheless. My favourite song has to be the Pagie bonus stage theme, which is a happier and funkier remix of the title theme. It’ll surely have you humming along and make the tricky sections a little less infuriating. 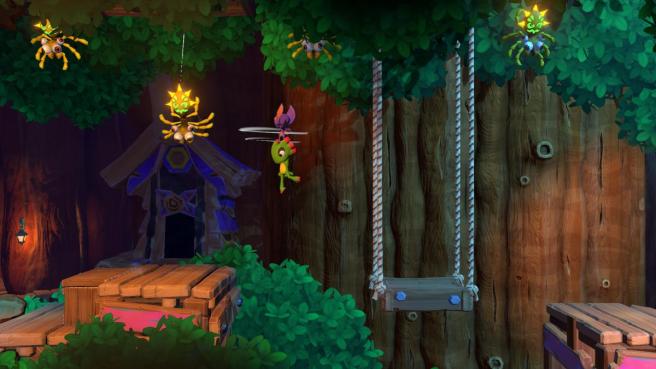 Yooke-Laylee and the Impossible Lair makes me very happy. It is amazing to see a studio take onboard criticism of their first game, scale back and counter with such a solid game. Playtonic has crafted a game which is more than worth the £25 admission fee and has kept me invested and engaged throughout, something which many games struggle to do. The duo might not be quite at Smash Bros level, recently appearing in Brawlout, but with a few more titles of the same calibre of this, they’re sure to be highly regarded within the platforming genre. Please, go out there and support this studio, this is absolutely worth your time and money.

UK based video game reviews and opinions. Hailing from that awkward time in life where you don't really know what you're doing, so I occassionally like to jot my thoughts down here. I hope you like reading them.