I recently started doing yoga on a regular basis due to the quarantine, I also recently picked up Doom Eternal. This led to all the work on my zen and energy flow to dissipating in a matter of seconds, and I wouldn’t have it any other way. So, picture this – you’ve just finished your vinyasa flow for the day, you choose to postpone starting Animal Crossing and load up Doom Eternal instead…

“Against all the evil that Hell can conjure, all the wickedness that mankind can produce, we will send unto them… only you. Rip and tear, until it is done”

What. An. Opening. Statement. It only gets more badass from here, strap in, cock your shotgun, lets rip this thing wide open.

I never start a review with a focus on the music, but it really is the consistent through-line for the entire game. Doom 2016 was the most metal game I have ever played, no longer. Doom Eternal is the most metal game I have ever played. Mick Gordon returns from Doom 2016 to once again deliver a bone breaking soundtrack to accompany the bone breaking gameplay. The heavy guitar chugs and electronic distortion complement the atmosphere of the title perfectly and while it can be a little hammy, it works in favour of the aesthetic, not against it. Sadly, the OST hasn’t been uploaded to Spotify yet so I can’t feel like the Slayer in my everyday life, but I’m sure it’ll be there soon, I’ll be waiting.

Oh, also, look at that for a cover. Badass.

Tools for the Job

Gunplay is a much smarter affair this time around. Whilst it might still look like a blood-soaked gore fest, and it most certainly is, under the hood there is a lot more strategy than you might first think. The constant focus on aggression remains – there is no regenerating health here, if you’re on the brink of death, you either need to run to the nearest health kit or rip an imp in half with your bare hands. Always be on the offensive. This means that you constantly must reprioritise targets within the heat of battle, do you want to dispatch of the pesky hell soldiers now? Or leave them alive in case you need a health boost later? It is incredibly well thought out, despite the crimson window dressing. The glory kills system from 2016s outing makes a return, which makes those straggling weaklings essential stations so you can refill your combat supplies and look brutal doing so.

This translates into the ammunition and armour systems too. Ammo is far scarcer this time around, which caught me off guard in the early hours of Doom’s 15 or so hour campaign. This is handily compensated for by the chainsaw. When you use this disgusting instrument on an enemy, their corpse spews out ammunition for you to use. Since the fuel refills over time, you are incentivised to keep sawing demons in half as you deplete your ammo resources to keep yourself in the fight.

The lower ammo count also means that you make use of all of your guns far more often, you can’t have a favourite gun and stick to it, you need to constantly be switching to keep up. Chainsaws, flamethrowers, grenades, shotguns, grappling hooks, swords, they’re all here and accounted for. It is just an absolute delight to play. This is further enforced by enemy weaknesses to certain weapon types. This keeps the gameplay consistently fresh and frantic as you swap your entire arsenal, all without reloading a single time. You’ll have your favourite tools of death, sure, but if you try to stick too rigidly to it, you are going to die. This is a tough game. 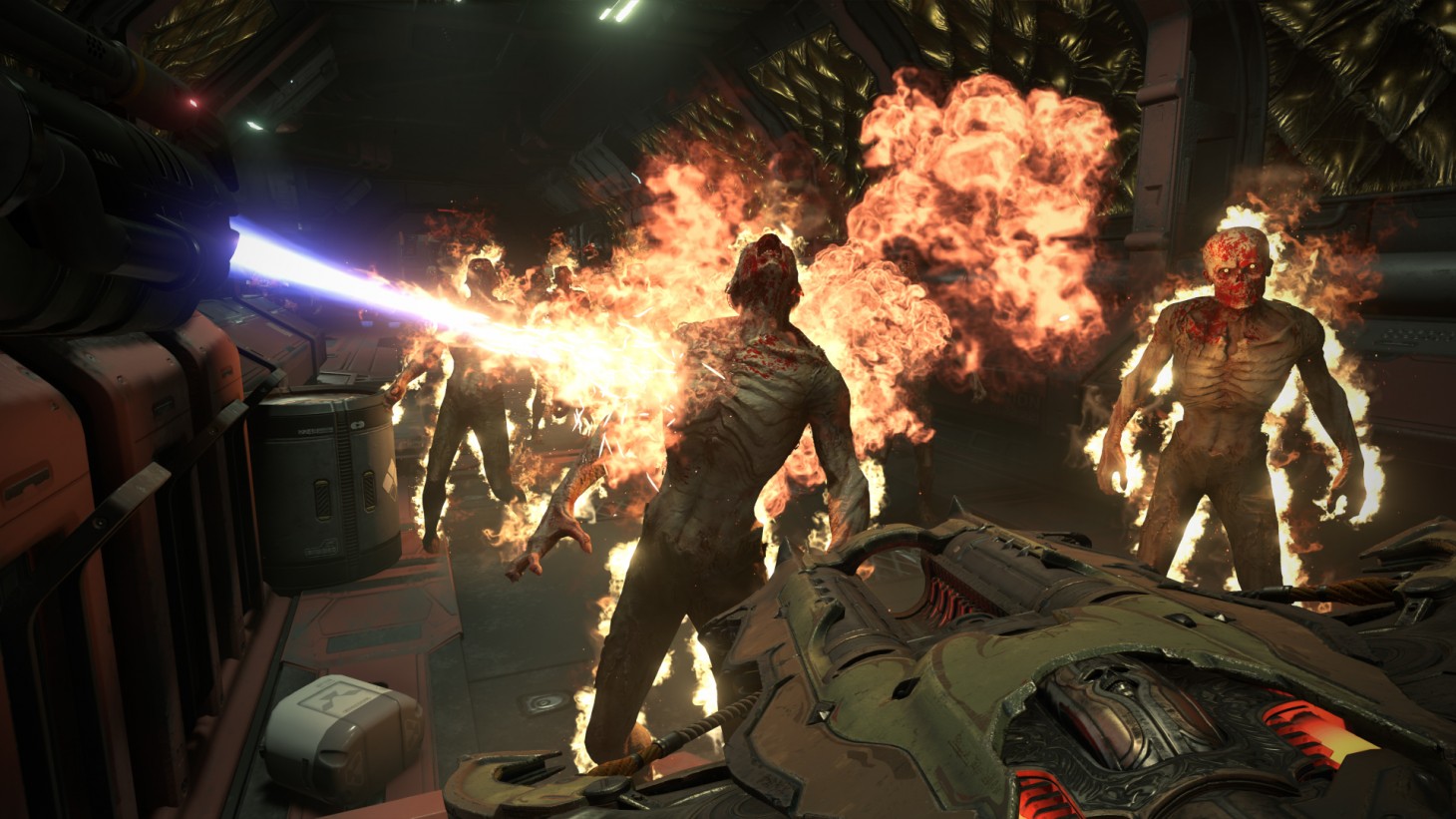 On the subject of demons, there are significantly more than in 2016s Doom. As mentioned, each demon has a specific weakness, whether that be a part of their body, a particular ammo type, or just fighting at specific distances. Combat in this way feels more like a boxing match than a regular first-person shooter as you dash and weave around enemies, picking your shots until you’re ready to lunge in for the kill and brawl your way back out. The different combinations of these demons means you are prioritising and reprioritising constantly and makes all combat sections a bloody thrill.

All these systems and weapon options would mean absolutely nothing without somewhere fun to use them. Thankfully the arenas you are thrust into in Doom Eternal are all expertly crafted. There are multiple routes around each which gives you plenty of space to give yourself room and essentially means you never have to stop moving. If you do back yourself into a corner, it is your fault, time to fight your way out.

There is a much larger emphasis on verticality this time around, with the Slayer now been given the ability to swing on poles to travel great distances more quickly. Jump pads and teleporters are also sprinkled throughout, giving you plenty of options when making a tactical retreat.

So, you will die a lot. It never feels bad though, each time you’re in a combat situation it just feels so good, you always want to keep playing. No matter how badly you get beaten down, you can always turn it around with a well-timed “glory kill” or using a super-weapon. It is so fun, it’s rad, so metal, I’m rambling…

Another new addition to the revised Doom formula is much more platforming this time around. The swinging ability mentioned earlier plays a key role here alongside some scalable walls which Doom Guy can easily latch his claws into. The dash and double-dash are essential here too. What these abilities mean is that they can be chained together in interesting ways as a means to break up the relentless pace of the combat.

Jumps were forgiving enough not to be frustrating and if I was ever unsure where I needed to vault to next, the excellent map system was more than capable of pointing me in the right direction.

There is one massive chunk is gristle in this excellent meaty steak of a game though. There is a water level, sort of. The resulting swimming sections suck and gave me PTSD back to the days of Sonic 2, drowning is never fun. The controls feel weird underwater and overall, I’m not sure there was any need for this to be included, not when the rest of the platforming was this solid. 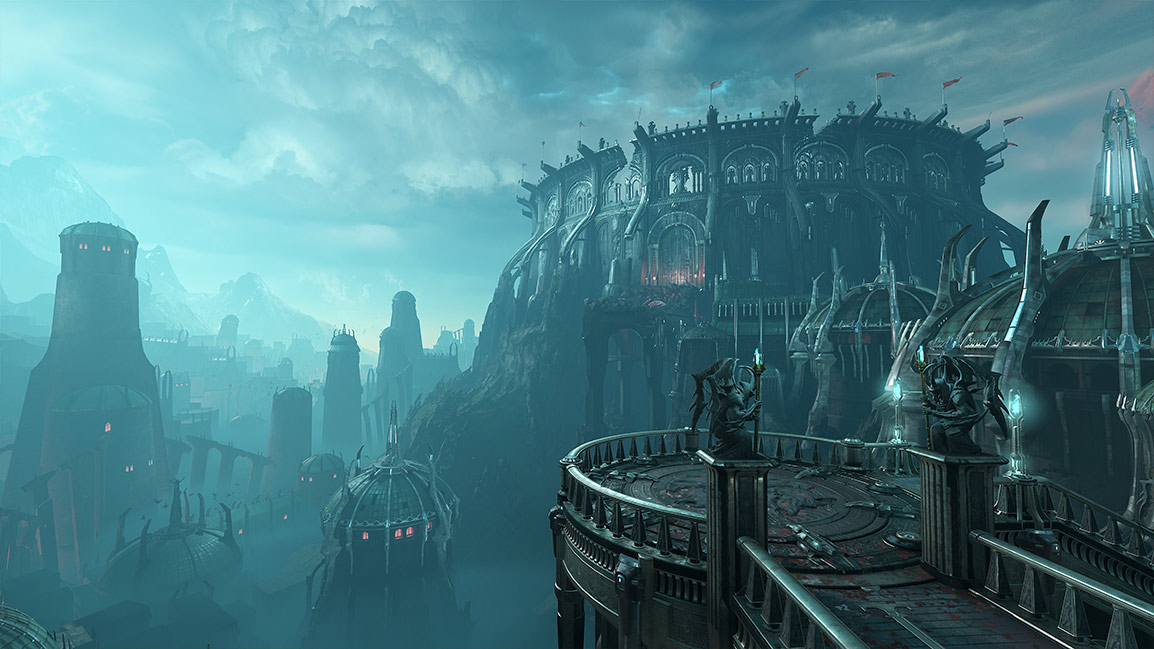 It never hangs around for too long though and when the environments look this good, I was more than happy to start looking in every nook and cranny to find neat little trinkets and collectibles.

The Spoils of War

Trinkets and collectables, you say? Well I love trinkets and collectables. Much like the 2016 iteration of Doom, each level is littered with collectables. These come in a few forms, such as “cheat codes” that alter the game in numerous ways, from fun additions like headshots having an additional burst of confetti, to masochistic alterations like enemies never dropping health. There are also music albums which contain tracks from previous Doom, Wolfenstein and Quake games, complete with a reimagined metal record sleeve. 1-ups are also present which is awesome, remember 1-ups? Stat upgrades aplenty, and of course, mini figurines. 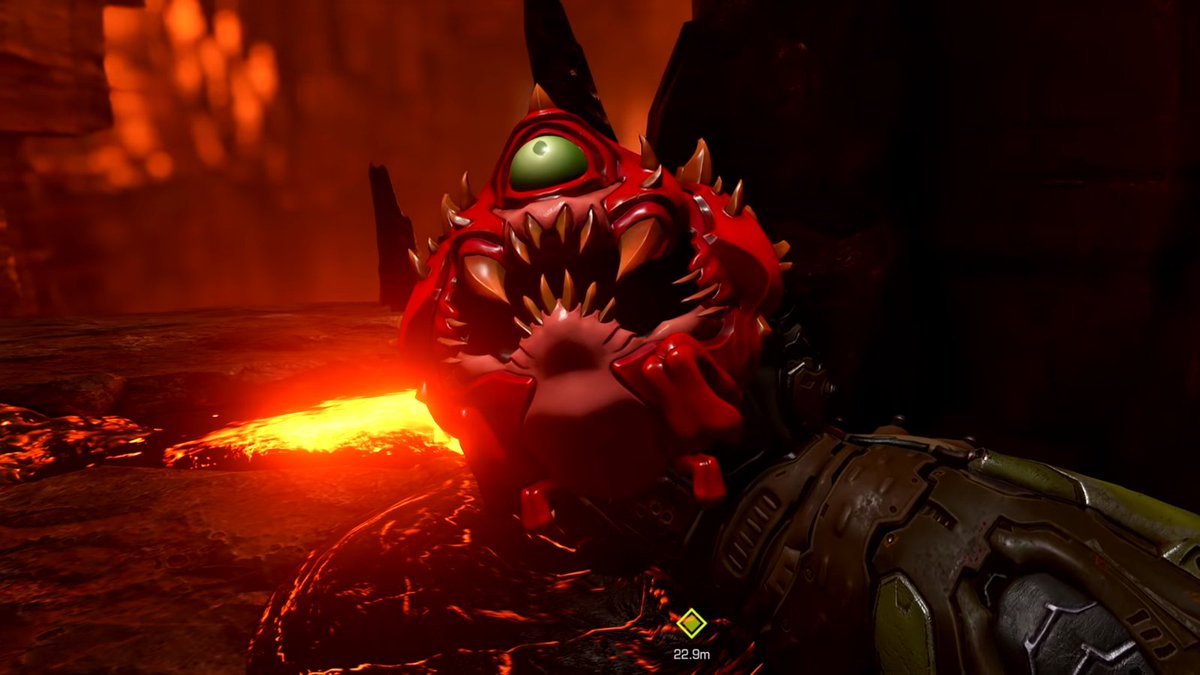 Each of these can be found through exploration, thorough scouring of the 3D map and environmental puzzles. These range from finding hidden tunnels and switches to making daring jumps using all the platforming abilities granted to you. They were always a fun way to break up the relentless pace of the combat. Although, there were a couple which get locked out behind checkpoints if you miss them. Thankfully a fast-travel system is activated at the end of each level so you can have another pass at these.

Finally, there are Slayer Gates which can be found, these hide the toughest combat challenges of the game and man, are they fun. Usually lasting around 5-10 minutes, these challenges in specific maps are chaotic, breathless bloodbaths. There were times where I was playing some of these and I am pretty sure I forgot to both blink and breathe. They are punishing on the harder difficulty levels and will keep you coming back with that “just one more shot” mentality. This is made easier not only by the amazing music in these sections, but it is just a bloody good time. The payoff for completing all of these is super cool too, although I won’t spoil that.

It is kind of like a big Fort Boyard in space, with less dwarves and more massive weapons. Tigers wouldn’t look out of place here either come to think of it. There are all manner of things to unlock here, from weapon upgrades, suit modifiers, cheat codes to activate and even some cosmetic changes to add some personality to your slayer. It’s neat. The fortress does seem a little too big for its own good though. It takes a while to get around the whole thing and it is quite easy to get lost – it isn’t a big deal at all, but something a bit more condensed might have helped here. Has Doom Guy considered downsizing? The Doom Bungalow doesn’t have quite the same level of menace admittedly.

Reading is for Suckers

I saved this until last, it doesn’t really matter, who cares. There is story here if you really want to look for it. This is mostly confined to reams and reams of log entries. Whilst I usually wouldn’t be fond of this, it allows the pace and energy of the rest of the game to remain high and the overall package is more enjoyable because of it. 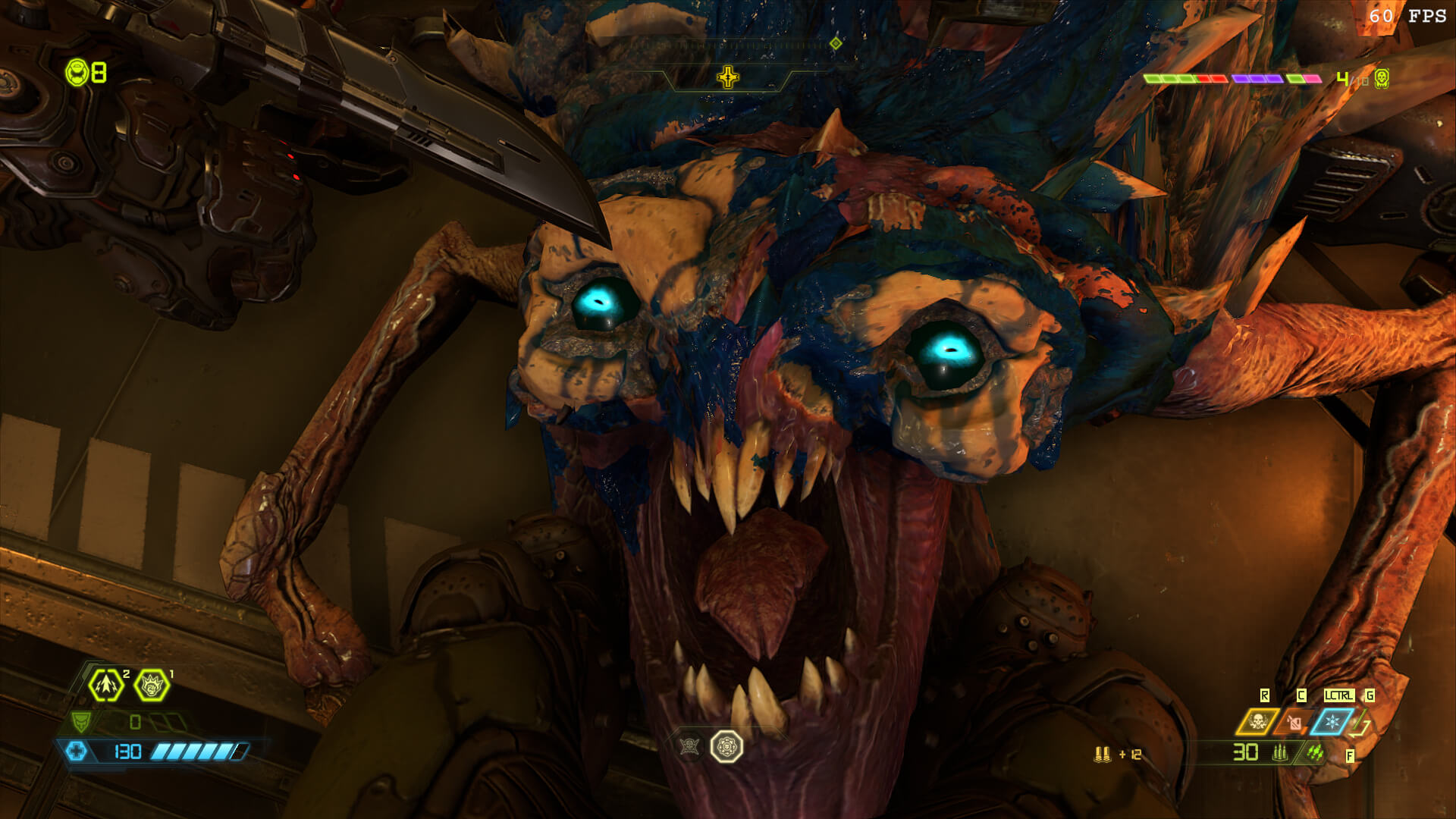 Do you actually want me to summarise it for you? Really? Okay…

Some bad alien lady is invading Earth, letting demons loose and that. Doom Guy doesn’t like that very much and decides that he would like to stop the invasion and likely decapitate the alien lady in the process. I think that about covers it.

On the whole Doom Eternal is an excellent package. It has a great core gameplay loop that make the first run through is a total blast and plenty of collectables and secrets to make for richer subsequent plays. Whilst the attention it demands may make you not want to play it every night, and it may utterly destroy your yoga routine – those nights where you are in the zone, you will be unable to focus on anything else. 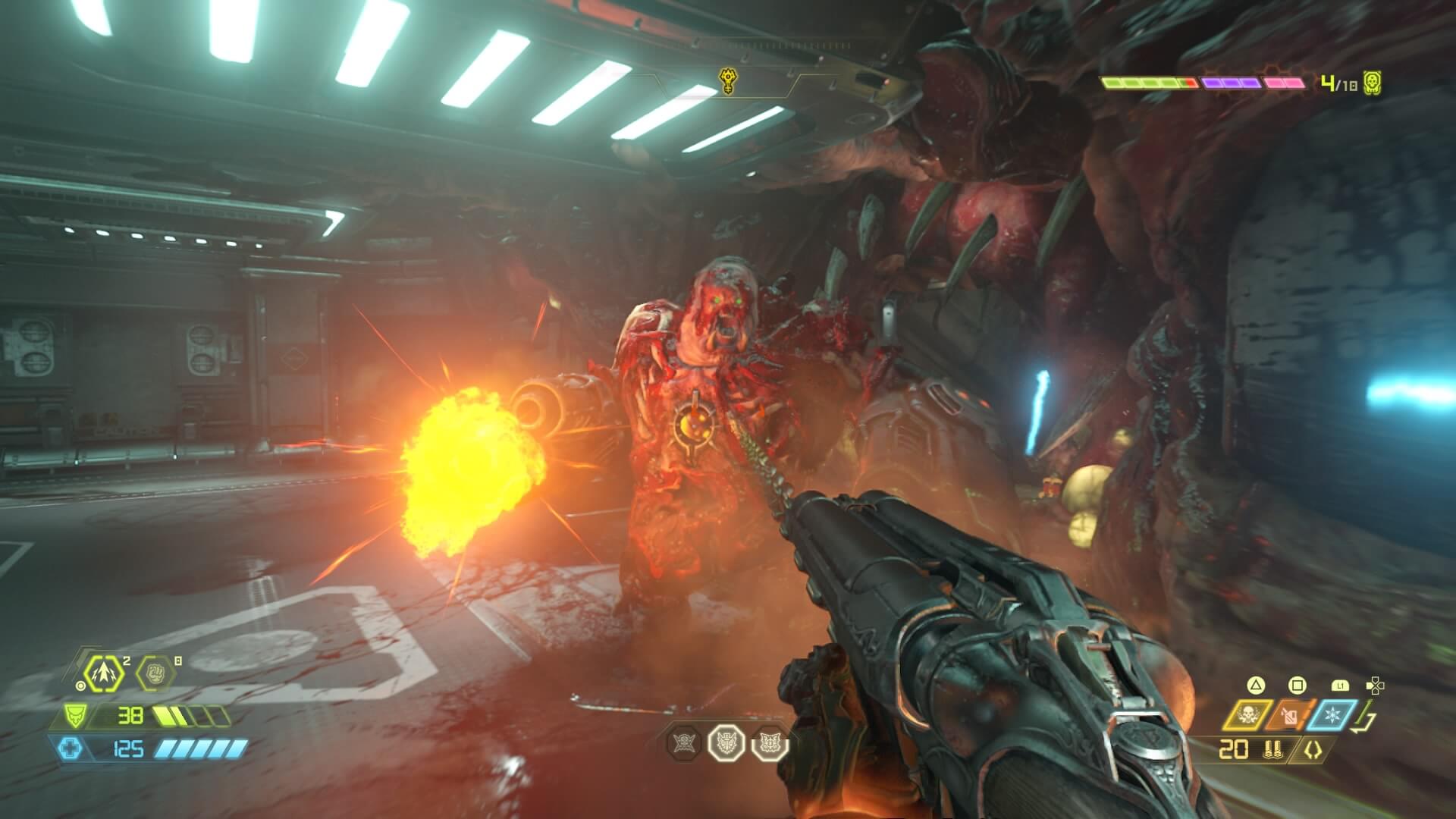 One thought on “Doom Eternal Review: Yes, You Can Punch Someone So Hard They Burst”