So I just got done playing Persona 5 Royal, it is absolutely fantastic, easily the definitive way to play and the lengthy adventure remained engaging throughout my 110 hour playthrough. This is worth noting because any game played immediately after this, in the run up to The Last of Us Part 2 is always going to have a tough time. Off the back of a game like that, anything is going to be comparatively shallow, and while I hope that bias doesn’t creep in, I am by no means a professional.

My Friend Pedro is a game as gamey as they come. The protagonist is your typical teenage focus group “cool dude”, styling a gas mask and looking like he collects cans of energy drink he sank over the previous summer. You take instructions from Pedro, your companion who is also a banana (XD) and the whole game is about looking as badass as possible, riding skateboards, motorbikes, blasting shotguns, etc. It is all very radical, man.

This all sounds like it is trying quite hard, and it is easy for this kind of premise to devolve into Borderlands-territory in terms of writing, but is that the case? When we peel back the skin of this banana will we found the delicious overripened mush that I like so much? Or will we find that brown gunk that gives me the creeps?

Anything but Mellow Yellow

Being a Devolver published title, you know what to expect here, stylised bloodshed to a thumping soundtrack, but how does My Friend Pedro compare to other titles like Hotline Miami and Katana Zero? Well, pretty good, when it works it really works.

Starting out you have access to a very generous focus meter, which slows down time to a crawl, giving you extra moments to breathe, plan out your next target, or just bask in your own awesomeness. You also have your trusty dual pistols which can each be aimed individually, the execution of this is a little finnicky and can sometimes induce hand cramp, but when you pull it off, it looks very cool. There is also a pirouette which not only looks the bomb, but also grant invulnerability for a short period. Using a combination of focus, acrobatics and environmental kills, it is your job to run and gun down as many people as possible. Each kill refreshes your combo timer and focus, and it can get addictive to replay particular segments that you can sustain your score multiplier throughout. 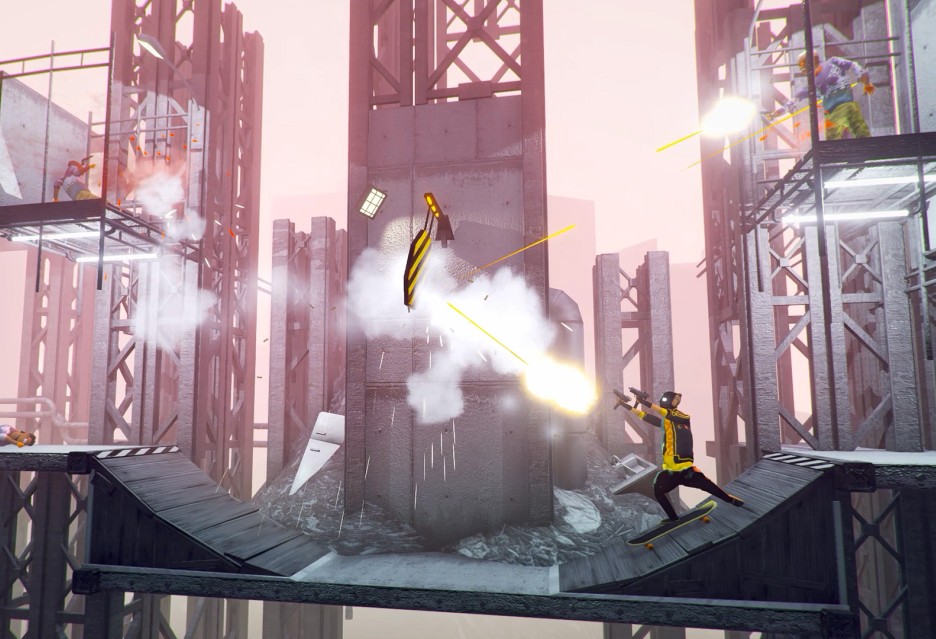 This score-attack mechanic means that the momentum is forever forwards which makes it all the more frustrating when some of the mobility options don’t quite pan out consistently. For example, rising the skateboard or the barrel, due the physics being handled separately, it can feel more clumsy than necessary, taking the spectacular wind from your sails if you have a high combo running. The same issue can be found in the platforming sections, the wall jumping is not quite as natural as something like Mario or Hollow Knight, seemingly an unfair comparison, but it is so integral to My Friend Pedro that I had to mention it. These oddities can lead to a lower score than you’d like and can be frustrating, but all this means is that you’ll have to retry that relatively short section again. Thankfully, that is always a joy to give it another shot. 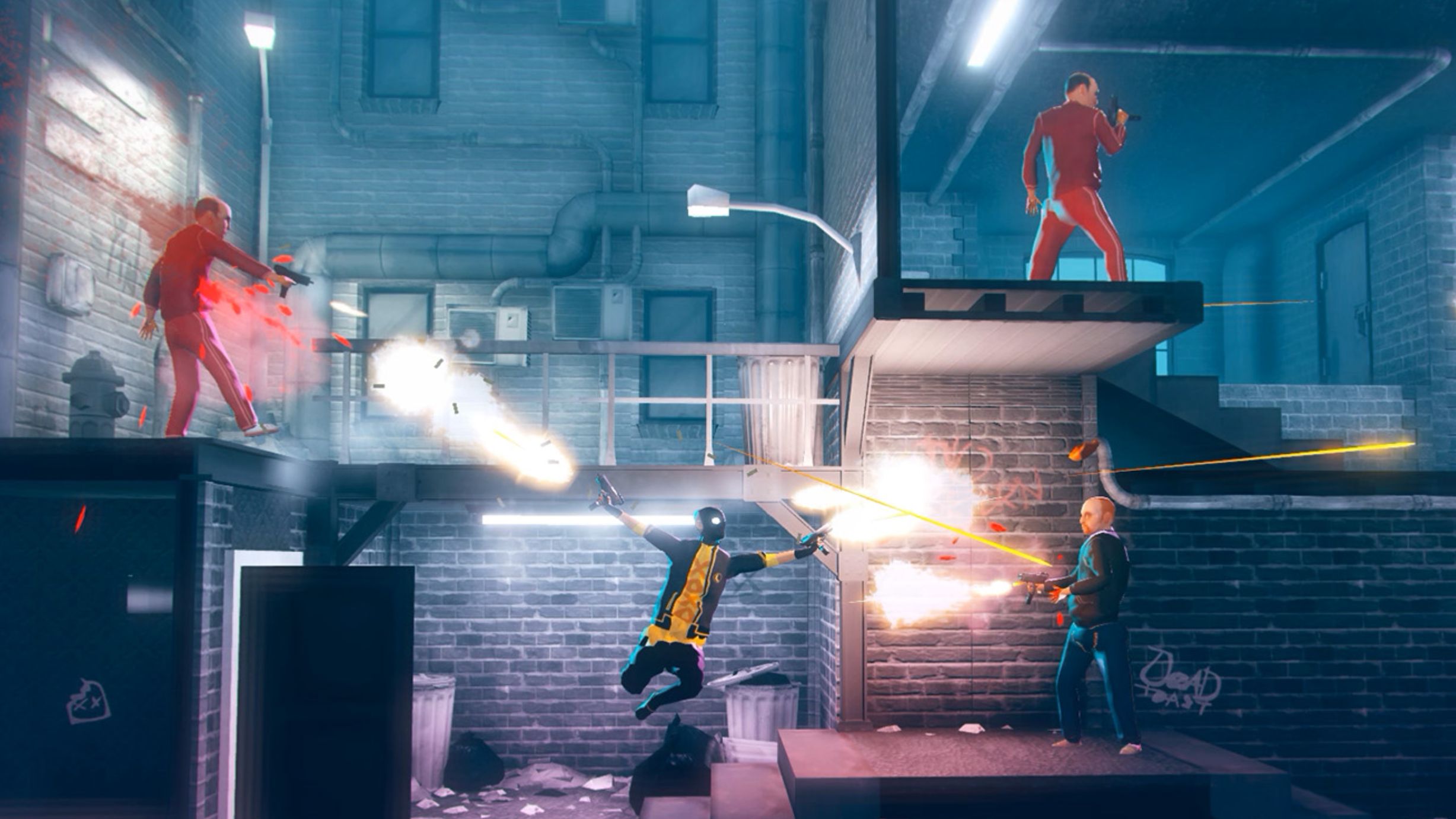 As I have mentioned however, when all of this works, it really works. Once you have your full arsenal unlocked, you are a threat to all living things. Everything becomes deadly, skateboards, frying pans (which are used to ricochet bullets), disembodied heads, basketballs, it gets wild. It allows for a fair bit of creativity and personality if you are able to master the controls, which, as I’ve mentioned can lead to some bizarre contortions of your digits. All this said, it is incredibly fun when everything falls into place, and this won’t happen in every level, but that’s okay.

Mechanics such as this would simply go to waste if there was nowhere cool to flex your devastatingly efficient muscles though. Each level in My Friend Pedro is short, usually taking under 5 minutes, after which you’ll be graded on your performance. This lends an addictive “mobile game” feeling to it all, and not in the bad way, it is the same way that Steam World Heist was able to get it’s hooks into me. I needed to 3 star every mission.

Each stage is littered with stuff to make you look like a true harbinger of death. Ziplines and ropes allow for you to swing overhead and rain lead from above, whereas breakable windows exist just to make you look wicked. Using these, the many explosive barrels and different surfaces to ricochet bullets makes each stage interesting, the ziplines being a personal favourite of mine.

There is some light puzzle solving needed in some of the missions, your typical levers and switches to open new paths fair. This does feel a little out of place at points, particularly on your first run through, these sections are highly likely to kill your combo multiplier.  There isn’t much to say about these sections, they are sometimes a pain, other times inoffensive. 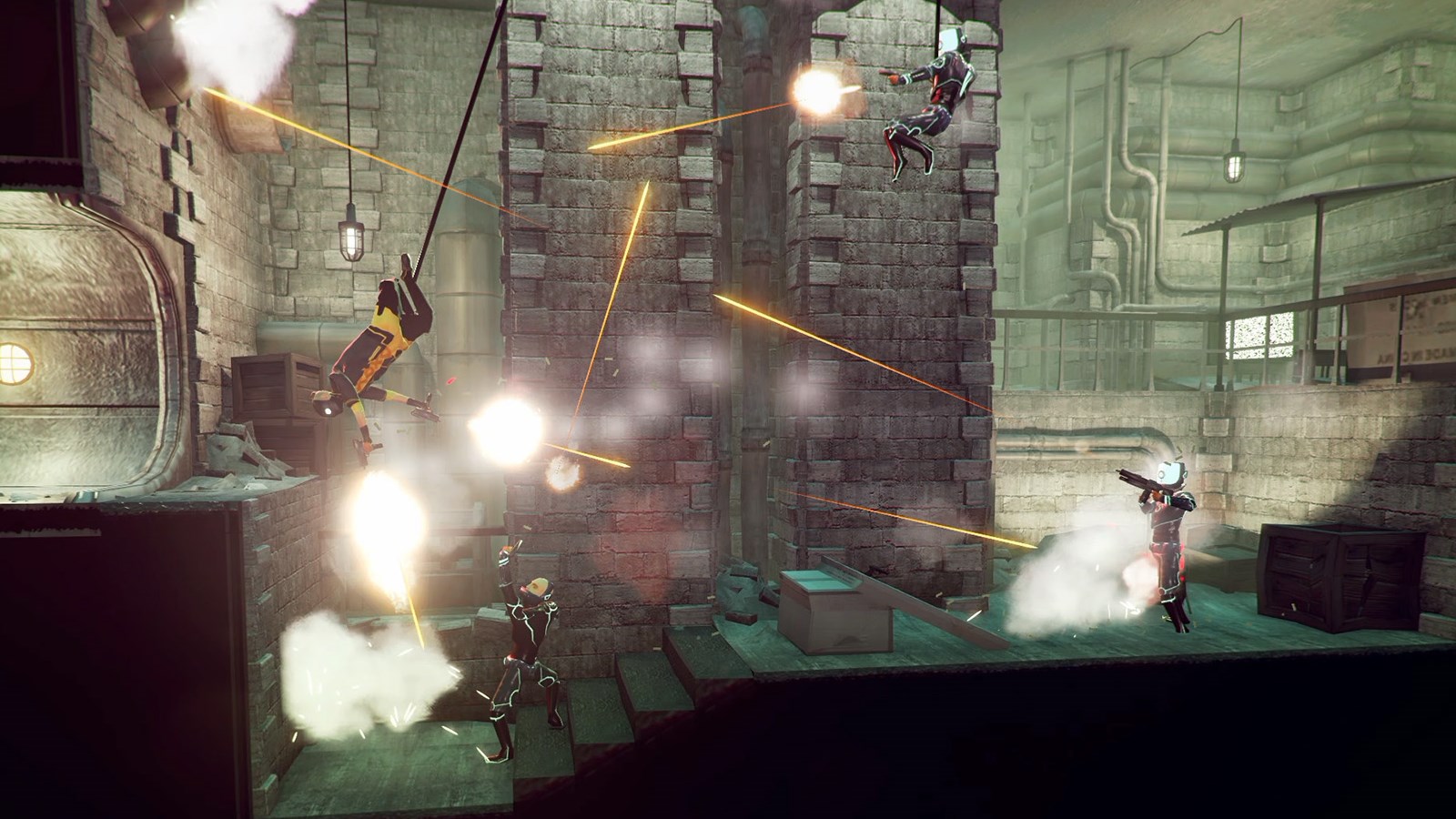 There are other special stage types to help break up the game, and these work a lot more effectively than the puzzles. These keep the gameplay fresh in a way that compliments the mechanics at play, unlike the puzzle segments. These stage types include a motorbike chase, a freefall from the top of a skyscraper and even a mission where you can fly using a helicopter hat. Some of these are awesome and, in most cases, ended up being my favourite stages throughout the roughly 5-hour campaign.

“This is a Video Game ROFLMAO XD”

The story revolves around visiting several locales which don’t vary too much, all having a dark, grimey aesthetic, with the exception of one area in particular. The story isn’t really too engaging, there are whacky characters, but they’re whacky in that “ZOMG gamerzzzz” kind of way. I don’t really like this style of writing, evident within my Borderlands 3 review, and MFP is no exception. I guess it could be looked at as a “gamer power fantasy”, if you really wanted to look that deep, though I’m not sure that is the intention. Each boss is introduced at the start of their stages and you try to get a feel for their personality, sadly there isn’t much depth to them, but you aren’t really here for the story.

These boss characters are another way in which MFP likes to break up the action, thematically this is much more fitting with the tone of the game. However, the one-on-one aspect feels a little at odds with the score-attack nature of the game, it would’ve been cool if there were more ways to keep your multiplier high during these sections, rewarding better play. This being said, the final two bosses in particular were great. There is also a fun bout against a foe with similar bullet dodging and acrobatic abilities to you, giving a very Dante-Vergil feel to the encounter.

The music is also a nice addition to the game, with repetitive heavy dance beats to accompany your skull crushing antics. As with many of my reviews, I don’t know enough about music to comment much more than that. It fits the action, though it isn’t something I’d ever listen to in my free time and it doesn’t live up to the likes of other Devolver published titles either.

My Friend Pedro is the closest thing to a Hardcore Henry game I think we are ever going to get. It can be frustrating at times, but if you can get past that, there is a tonne of fun to be had here. If you’re a fan of chasing high scores, or just over-the-top action, you are sure to find something to like here. The low price-point also makes it an easy recommendation, particularly when it is on sale if you need to kill a weekend. 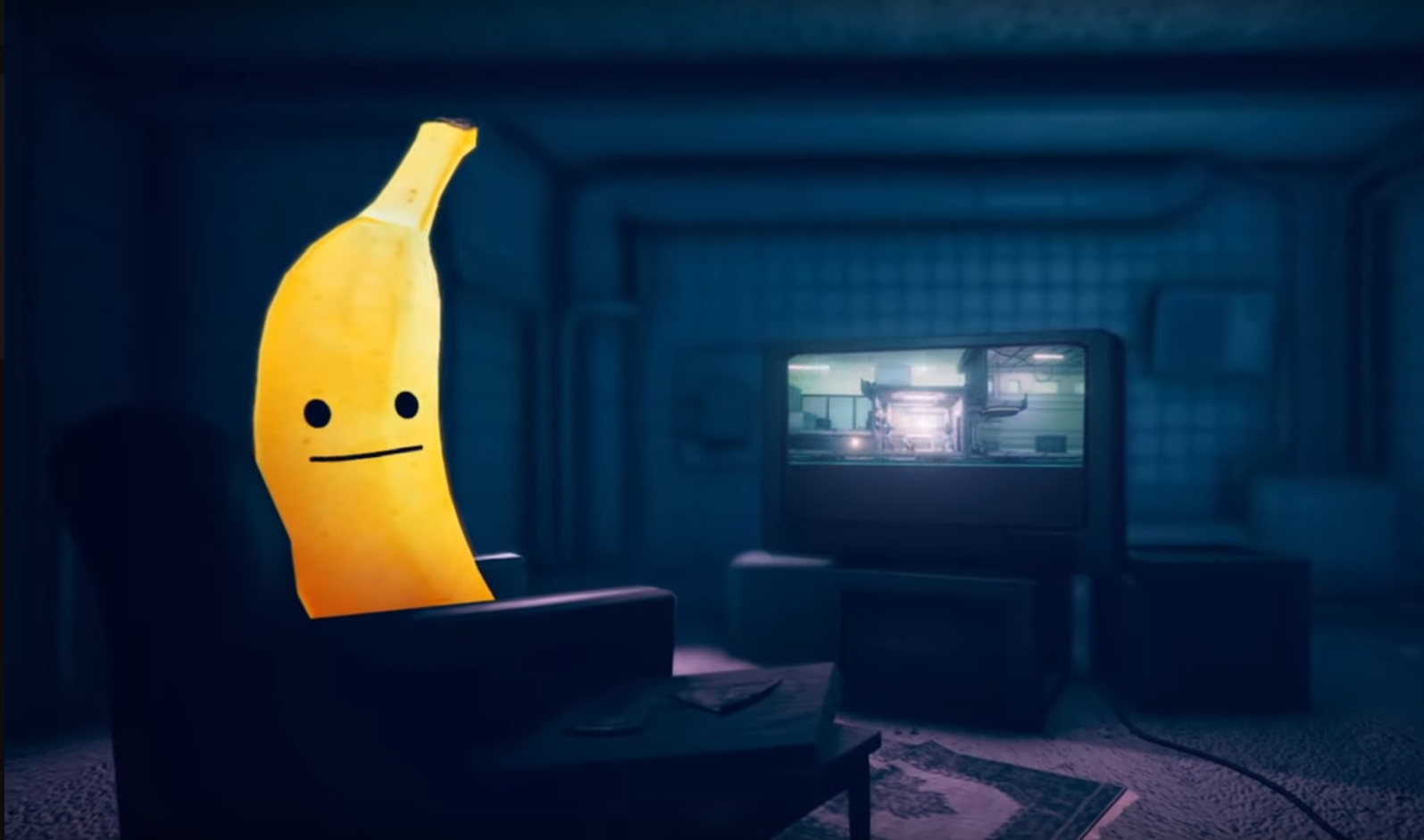 It is short, there is replay value in the form of modifiers which grant unlimited ammo/focus/health and other bonuses. If any of this sounds like it could be up your alley, you can’t really go wrong for a tenner (or your regional equivalent).

2 thoughts on “My Friend Pedro Review: The Peel Deal”