Whilst this title may sound like a LinkedIn sponsored post, I assure you there will be no “theory X”, “theory Y” or “hierarchy of needs” referenced here. That is a business reference for you. I did the business at university and had to show it off somewhere.

Progression in games is a hard thing to quantify, how do you reward a player for giving up their time to play, to enjoy, to master? There are a few ways of demonstrating rewards and alike to players. I am going to touch on a few of the best and most common methods some of my favourite games reward and empower me, making me itch to come back and play just a little bit more.

The main examples of this method of progression are found within most RPGs such as Final Fantasy or Borderlands. I think there is something primal about seeing numbers, the more you play, the higher these numbers get. It is endlessly satisfying to see these figures grow from single, to double, then triple and even quadruple figures. I really want to visit this subject again further, there must be receptors in your brain to cause this reaction.

It is the entire way to know if you are any good at an RPG: “How big are your numbers?”, “not as big as my numbers, therefore I am better than you”. My entire life is like this, Barclays lording it over me with their ISAs and big scary interest multipliers. The inverse can be said about the pubs I like to visit, the lower the numbers in there, the more I like it. £5.40 a pint? No thanks… I digress, numbers are everywhere.

This is one of the main draws of Borderlands and adds to the satisfaction of the gunplay here, whilst the actual feel of the combat can be floaty and imprecise, landing a critical shot with a shotgun and seeing digits spill out of your opponent feels like the best thing ever. You’ve come so far from landing 7 damage per shot to now blasting the heads off bandits with 789 damage, plus corrosive damage and some other mad multipliers stacked on top. 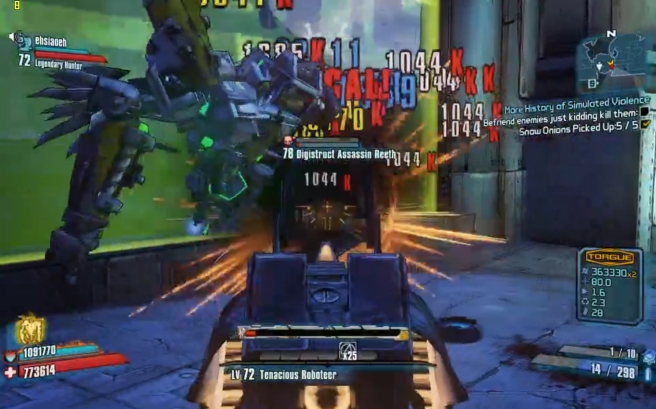 In the world of Borderlands, those with the highest numbers rule, and when you think about it, that’s kind of fitting given that the premise does revolve around companies duking it out over weapons, scarce resources and other trinkets.

I had to include this, it is a clear method of rewarding players, whether you’re playing Space Invaders, Smash TV or even Doodle Jump on your iPod Touch. Score systems are at the root of arcade games. I’ll be brief, the bigger the score, the more you are rewarded for playing, it could be the satisfaction of beating your own personal best or getting onto the leader boards, in the arcade cabinet or online.

Good luck getting onto those online leader boards though. I’ve tried, and some people are just absolute wizards, surely their hands are better suited to surgery or professional Operation. Restaurants would pay good money for a sous chef who could prep vegetables with the same speed and vigour of an expert Taiko No Tatsujin player. That’s the game below by the way and it’s nuts, if my sense of rhythm wasn’t totally botched, I’d love it way more too.

A sight to behold

I’m going to talk about Dark Souls now, this won’t be the last time either, I’m sorry. Everyone talks about this game, it doesn’t need any more attention. I just really like it. A lot. It is hard and stuff. 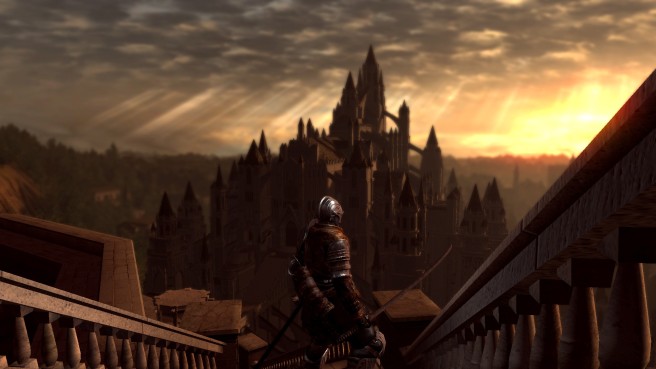 Dark Souls rewards the player, not through improved stats and instant feedback in this way, it does to an extent, but the reward isn’t necessarily additional stats due to levelling up like in the examples above. Dark Souls rewards its players with challenging bosses and areas to explore. The reward isn’t becoming level 44 or something, it is beating some horrendous monstrosity who you have fought dozens of times before and discovering some sweet items, an intriguing piece of lore, an impressive view over an area you have conquered, or in many cases, are yet to conquer.

This kind of design leads to tiny rewards of opening locked doors and returning to familiar areas, an interesting world also helps meaning that you want to go into that cave full of disgusting troll monsters, because there must be something cool there. All of this keeps you playing, coming back, no matter how hard you find particular sections, no matter how many times you get smashed into the pavement, you know it’s going to feel colossal when you persevere and overcome.

My third and final example of progression being dispensed to keep players on the hook is simply fun and visual feedback. Yahtzee Croshaw classed Devil May Cry as a “spectacle fighter”, whereby the game was not bothered about the dispatching of foes, rather, wanted to empower the player to look good while doing it.

Now, this is a reward in itself. As you begin Devil May Cry, any of them really, you are likely going to look clumsy, you’ll have fun, sure, but you won’t be truly rewarded. After a few hours of play, some extra abilities under your belt you’ll be summersaulting around the place, taunting, riding your rocket hand like a skateboard and kickflipping demons into smithereens. That’s the reward here. It feels incredible to improve at using the countless systems in these games, and I haven’t even  scratched the surface, there are a tonne of people you can find online who dive into frame data, jump cancelling, micro optimising movement and other tiny details.

This isn’t the reward for me though. The real reward lies within the style system in place here, as you play, you get real time updates and feedback on your performance which varies depending on your variety of moves performed, taunts, evades, etc. I want to look badass. I want metal music to be blasting out of my speakers. I want the game to be screaming at me “BADASS”, “SICK SKILLS”, “SMOKING SEXY STYLE”. That stuff is like crack to me. Smoking sexy style, doesn’t that sound ridiculous? It should, because it is, and I love it.

Further to this, you lose these style rankings any time you are hit which just adds to the tension when you have an SSS combo going, at any minute you could be slammed straight back down to D. Completing each battle scenario with an SSS rank is the reward, the reward is just a fun game, it’s basic, but that’s the situation here.

Give Me What I Want

Whilst many games have numerical rewards to designate progress like I have mentioned above, others combine this with different elements, such as interesting story revelations or just a fun and satisfying gameplay loop. There are other ways which progress can be made too which I haven’t touched upon here, Journey for example, how does that game reward a player? It certainly doesn’t rely on a level or ability system. I might revisit this topic in a later piece, or just add to this one as I see fit.

I also didn’t want to focus on all the crumby ways to progress players or stop them progressing usually reserved for mobile games and other garbage that I don’t want to play anyway. Let’s keep it positive here. I can talk about that another time when I’ve had bad service at my local, that’ll get me riled up.

Games are great, I like when they reward me with a fun time. That’s nice. More games should do that.