Persona 5 is awesome. There is no way you can convince me otherwise. It was by far my game of the year in 2017, no mean feat given some of the other releases that year. Mario Odyssey, Breath of the Wild, Horizon Zero Dawn. To this day, I still blame this game for the drop in my predicted university grade falling from a potential first-class degree, to a 2:1. You know what, I don’t even mind, it was worth it. I can gush about this game all day and, being inexperienced at writing lengthy reviews, I don’t want to ever sell this game short. Perhaps I’ll revisit this when Persona 5: The Royal is released next year.

For today though, I wanted to focus on a few of the elements that makes this such a masterpiece and explore this further. Why is Persona 5 so engaging? From the minute you boot it up, to the minute the credits roll 100 odd hours down the line. Presentation is everything.

I love comics, manga, anime, all that weab trash. The best aspects of those mediums are translated and mixed in a large pot of RPG goodness with Persona 5. This means that the story of Ryuji, Makoto, Morgana and crew are long, really long, as I said, ruin your degree long.

Atlus have achieved this first and foremost through great writing with all the charm and cheese of your favourite anime combined with an excellent localisation job – particularly with characters like Ryuji who regularly use phrases like “get rekt”, it’s cheesy, a little cringey, but endlessly endearing.

There’s another reason for these story segments being so engaging, and that is the presentation. Like most great comics, there is an element of panel design here, how to best present these conversations in a way which could easily have been contrived and boring is one of P5’s greatest strengths. By combining a mix of full facial shots, flashy glances, and a sprinkling of usually inconsequential dialogue options, P5 keeps you entertained and engaged, through sometimes hours at a time of exposition.

The presentation is also fitting with the themes and ideas presented in the story, particularly rebellion and fighting back against authority. All the menus ooze with this style, dripping with all the angst of teenagers fighting back at the “evil adults”. Everything found here looks like it could be ripped straight out of, an admittedly talented, but very frustrated 16-year old’s notebook. I mean, look below, all this screen is saying is that you can make curry now. It looks friggin’ amazing, it makes curry look like the most powerful thing in the game, curry is the best thing ever, it makes me want a curry, now.

Are you bored of a usual level-up screen like those found in Pokemon or Final Fantasy? Well how about if it flowed seamlessly from the end of each battle and illustrated mugshots of each party member were splatted all over as if from some over-indulgent graffiti artist? P5 throws everything it has into every menu, every screen, no expense is spared when it comes to flare, you won’t find a single dull screenshot of this game, I implore you to try. 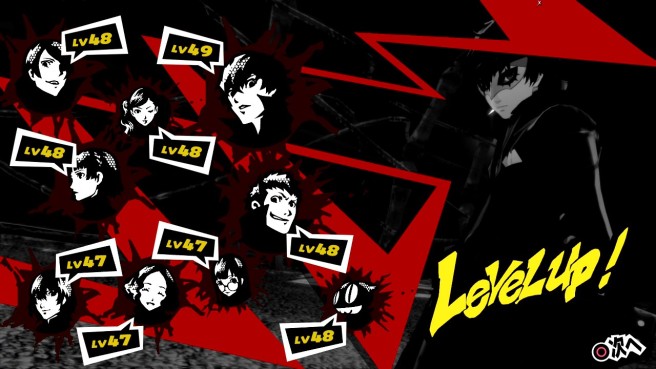 How amazing must that curry be…

Music to my ears

Similar to the visual style of the presentation. The audio is outstanding. From the moment you start this game, your ears are just slammed with memorable tunes which don’t let up. I listen to this soundtrack all the time and it has even opened me up to some genres of music I wouldn’t dare attempt to penetrate otherwise. Jazz for instance, imagine 14-year old me finding out that I’d pass up listening to Lamb of God in favour of some “acid jazz” inspired playlist on Spotify.

It is so damn funky. It means that when you look at P5, you can hear it too, I can show you any still from the game, and you can imagine what piece is likely accompanying it. How cool is that.

In addition to all this: the music, the UI, the story, something else which lends itself to P5’s success is the removal of a usual command list found in most JRPGs. Being able to navigate these menus with single button presses, means that each battle has less inputs than other games in the genre. This might not sound like much, but it allows each input to be more tangible, it allows for the infectious music to be carried over into these inputs too, and you’ll find yourself being almost rhythmic throughout each encounter as your thumbs dance excitedly over your controller. 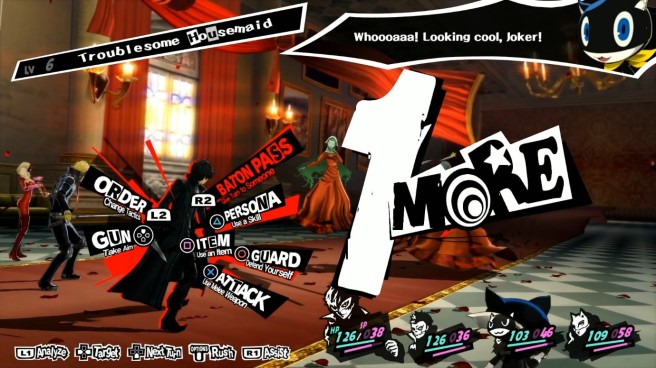 I haven’t even touched on character design, the way phrases like “hold it” or “weak” are displayed so effortless to inform the player, but not detract from other elements. It feels as though there is no HUD at all because it blends so seamlessly into the world Atlus have created. 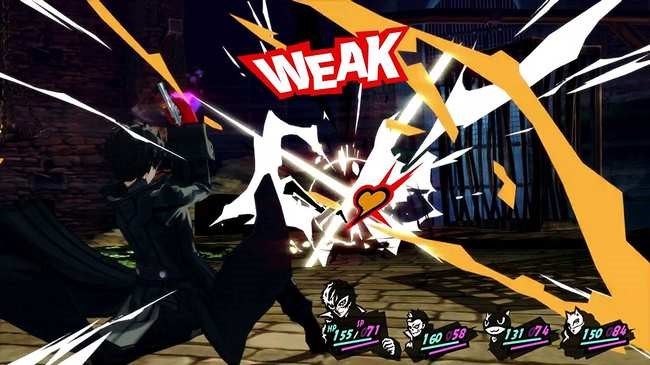 All of this is not to say that it is style over substance, at all. The combat system is deep, creating interesting decisions around guarding, baton passing, chaining together actions between party members and much more. It’s simply that this presentation ties everything together so seamlessly. It is so consistent, and that’s the key here, even the settings and options screens aren’t treated lightly, and the stylistic choices are felt through every frame you see, every note you hear and every curry you make.

Persona 5 is a complete dish, all ingredients contribute to the overall flavour of the game, the story alone, like noodles, are okay, but its only when you combine them with these other elements the meal really starts to sing. Add in the broth of a fantastic battle system, a medley of stylistic vegetables, season with some beautifully animated cutscenes and crack a big, jazzy, musical egg in there. Only then do you know you’re unmistakably eating Persona 5 ramen.

It creates such a distinct personality which I hope to see rivalled with similar games moving forward, presentation like this is sure to inspire other developers and I’m excited to see other ways a typically bland subject can be explored in interesting ways moving forwards.

If any other game can make something as mundane as learning to cook a curry as epic as this, I want to see it.