What a title right? Revengeance. It is actually perfect when you play the game though. Much like the title, it is a juvenile, ridiculous action romp with a soundtrack that will blow your face off. It rocks, and while that is an outdated adjective, it is so fitting for something like this.

Is it Metal? Gear? Or Solid?

Whilst it holds the Metal Gear name, and has a tone which is equally erratic, MGR is nothing like the Metal Gear Solid you know and love. The story is still a weird sci-fi adventure full of over the top set pieces, but it is far beyond anything that you have seen from the series before. It follows Raiden, one of the lesser liked characters from the franchise, but it turns him into a schoolboy fantasy, almost a parody of the brooding, tortured man we have seen before. He is absolutely the product of a focus group of angsty teenage boys, complete with eyepatch and robotic limbs.

The story starts off simply enough, Raiden is working as a bodyguard for some important guy, before being ambushed by Sun Downer (yes, the Kojima-esque names make a return too). Thus, it is up to you, and your trusty katana to slice and/or dice your way to get to the bottom of whatever is even happening. To be honest, it doesn’t matter. There are brains in jars, POW camps, the president in a big crab robot, honestly, its fun. All that really matters is you if get to suplex a Metal Gear Ray, and you do. 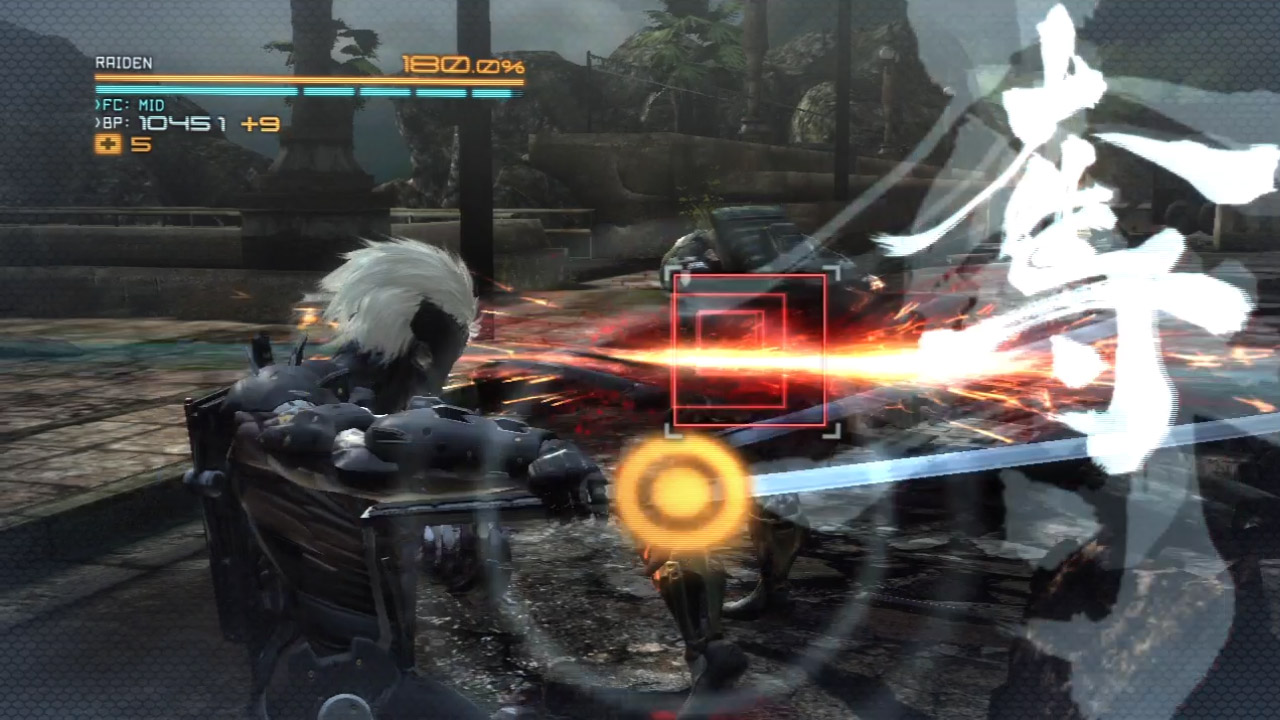 It was always going to be a struggle translating a slow, methodical, story-driven stealth title into a balls to the wall action bonanza. However, for the most part, the team at Platinum Games succeeded.

The game is your typical hack and slash affair. Raiden has a nice number of moves at his disposal which are executed using light and heavy attack buttons, with directional movement with the analogue stick being used as a modifier for some of these actions. You take on leagues of robots and army men, looking like a badass all the way.

Parrying is also a large part of the combat and is done using the attack button, combined with a directional push towards the approaching foe. This feels especially cool since it is like using a real katana, the best defence is a good offense. It allows you to keep slashing away and offers a satisfying shattering noise when pulled off perfectly, the generous window also helps the more casual players, with this essential tactic being more forgiving. I said just now that it is like using a real katana and I just want to say, I have never used a katana, I was just imagining, honest. I’m not some kind of nerd. 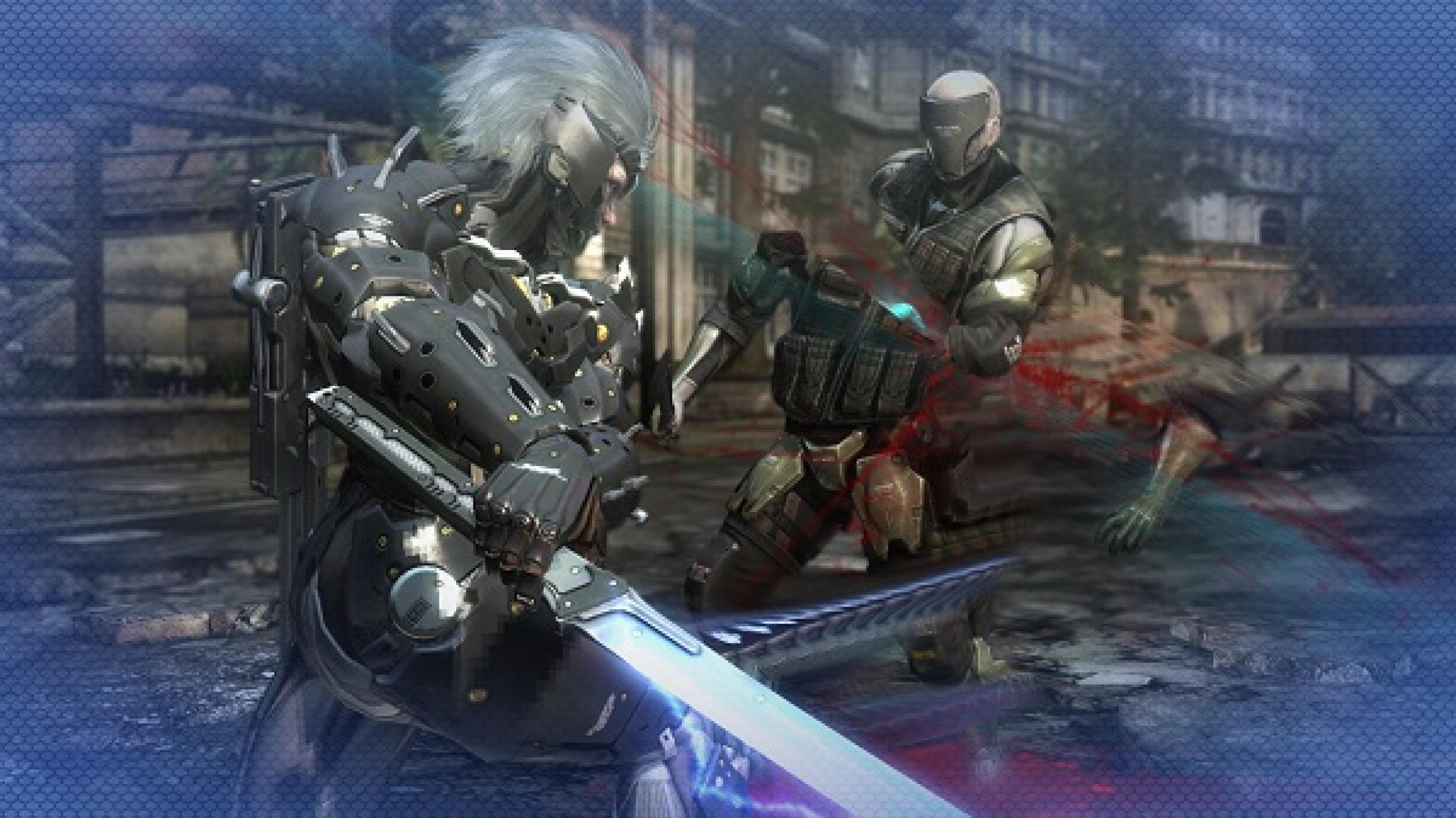 The main differentiating mechanic from other titles of the time like Devil May Cry or Bayonetta is the inclusion of “blade mode”. This is activated when an enemy has been damaged enough and allows for time to be slowed to a crawl. Within the window you can choose how exactly you want to chop your foes into fajita mix. There is a benefit to doing this more precise, if you can expose their spine by cutting them in the right place, Raiden can basically eat it and recover to full health. It’s is so good, especially when you realise you can chain these spine thefts together and clear an entire room. It is a mechanic which to this day I haven’t really seen be used anywhere else and it is one of the biggest reasons I want a sequel so bad. 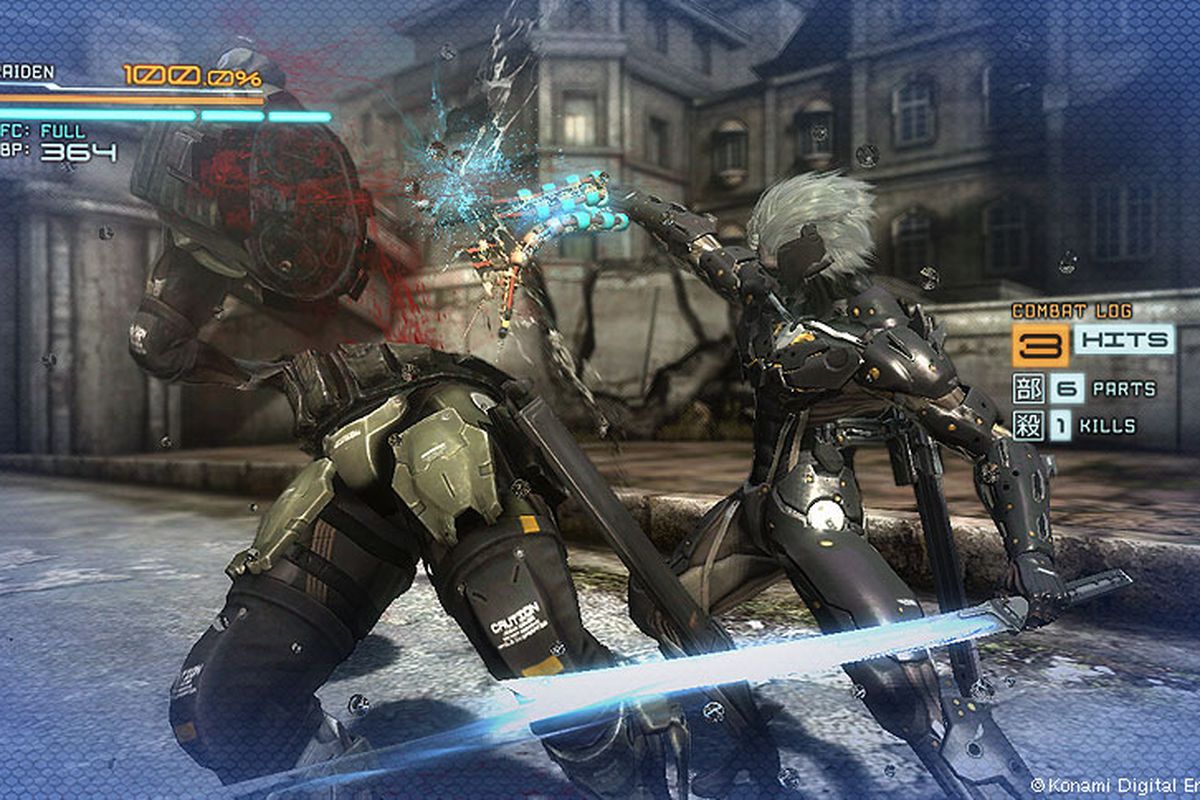 I mentioned before that this is nothing like the Metal Gear games that came before it and this is one of the main issues which holds the title back from being a masterclass in ‘character action’. Any systems or mechanics held over from these games feel at odds with the overall direction of this title.

For example, switching weapons breaks up the moment-to-moment action. Each time you want to do this, you need to stop the action and use a selector wheel like in other MGS games, but why? It discourages any kind of experimentation or combo potential, if I am dismembering robot gorillas, I do not want to stop. This system would be far better implemented something like Devil May Cry 4 did with Dante at the time, allowing you to swap on the fly and do some utterly outrageous manoeuvres. It just feels like this was put in place because you expect it from a Metal Gear game, but some things just need to be shelved if they don’t serve a purpose of the overall game. This is true of healing items, side weapons as well as the typically lengthy cutscenes, commonplace in the mainline Metal Gear entries, frequently pulling you away from the game’s strength; the action. 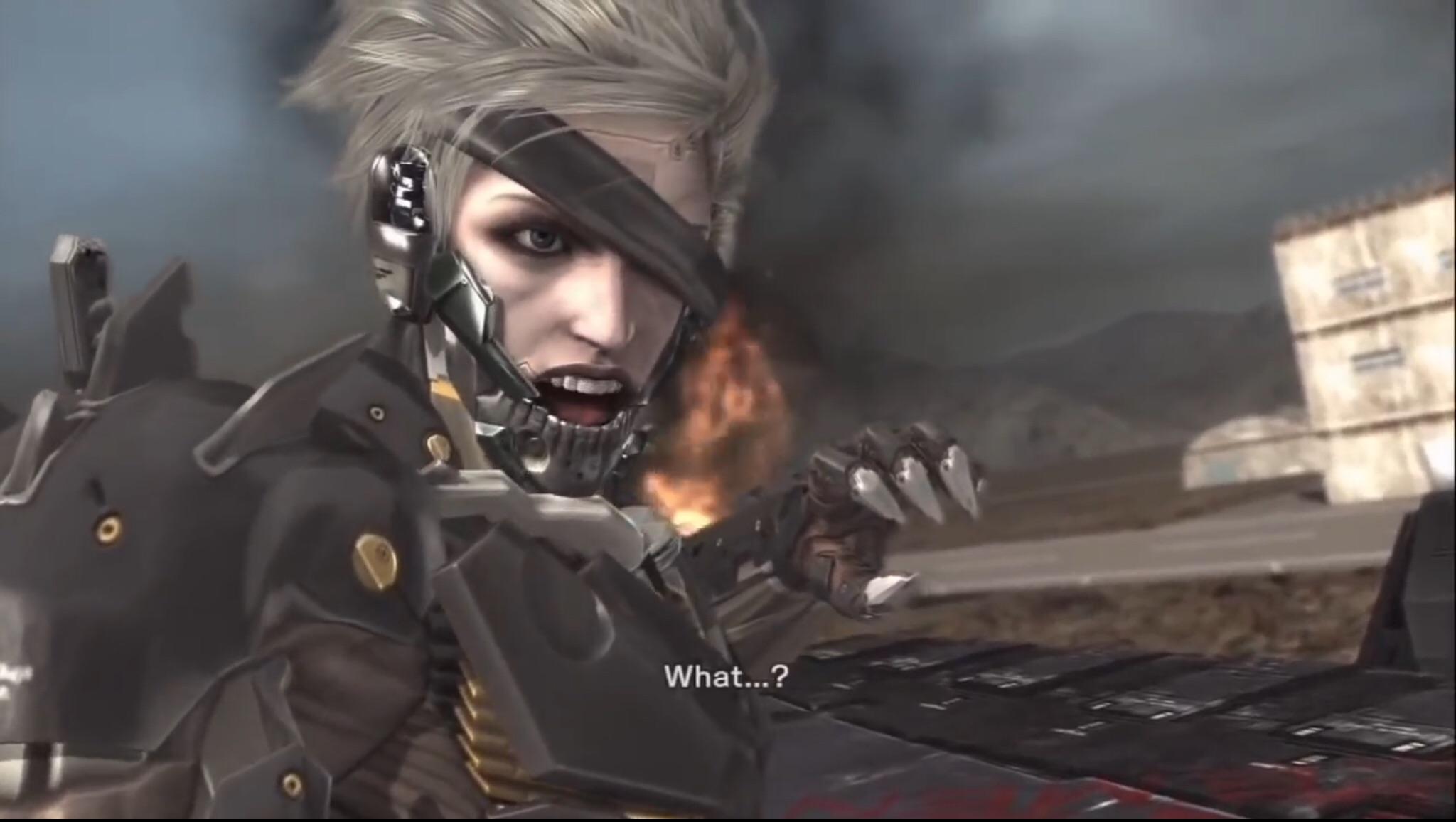 That is the biggest gripe out of the way. Everything else absolutely kicks ass. Oh, all of the flying enemies suck too. Why are they even here if Raiden has no way to close the gap or chain interesting combos in the air?

The environments to be honest are a little bland, consisting mainly of industrial factories, courtyards, offices and sewers. Again, this feels like a holdover from previous MGS games. The stealth is also included here, but it sucks and there isn’t much to say about these sections. If you get spotted, a swarm of enemies descend upon you, which is absolutely fine because the combat is so damn fun. So, the design here is pretty lame, but you are not here for the design. You play MGR for the set pieces. Whether it is running down the side of a building dodging lasers, running up the side of a building dodging lasers, or running through a building dodging lasers, it’s fun as hell. Some of the situations our cyborg ninja finds himself in are ridiculous and will definitely have you grinning like a child as I do whenever I replay this gem. It is so stupid. This leads into the pacing for this being excellent (when skipping any cut-scenes and dialogue). The game will only last around 4 hours if you play through in this way, but when you do, every half hour is expertly crafted, with cutting down on the “Kojima-ness” of it all. Each level leads to a chase or escalates towards a climactic boss battle. Man, these bosses though.

Everybody Loves a Villain

The boss battles are 100% the star of the show here. There is one at the end of each stage, adding to that fabulous pacing I mentioned earlier. It gets me excited just thinking about Raiden’s visor snapping shut as he prepares to engage his next foe, the music cranks up and you know; it’s go time. These escalate with each encounter and you will likely finish the first boss battle and wonder “how it could possibly get crazier than that?” But it does, and it is an absolute riot every time.

These boss fights are not just a spectacle to look at, they all use the mechanics laid out in the base combat in cool ways. I don’t want to spoil too much here in case you haven’t played it yet, but the use of parrying in a particularly misty area is sublime, it reminded me a lot of the pitch-black boss fight in The Zone of the Enders 2. Alongside this, “blade mode” is used in a load of interesting ways, such as to cut down shields and destroy incoming tanks and helicopters which get thrown your way.

Every boss encounter has multiple phases, each more over-the-top than the last, ratcheting up the insanity until the climax which is always satisfying. This usually involves an explosion, some slow-mo and a guitar riff to suitably punctuate the final blow before your report card and grading is gratifyingly shown to you.

Speaking of music, Metal Gear Rising has a soundtrack which transcends just playing the game. I have listened to these songs for years, literally years and they do not get old. They are made even better by the association with the game though, it is impossible to hear something like Rules of Nature and not want to rip the arms off a Metal Gear Ray. I love it and it is a mainstay in my “Oi Oi Gym Playlist”. Seriously, it bangs. Check it out.

Raiden, Your Blade, Will Cut

(^That is a Forged in Fire reference)

This is an odd one to summarise. I’m sure it sounds like I hate Kojima and everything to do with the Metal Gear Solid series, but the opposite is true. I love those games. It’s just their influence and presence really harms the flow and enjoyment you get out of this spin-off. I want a new Metal Gear Rising game so badly, I think that given another chance, the flaws could be ironed out and we could have our Devil May Cry 5 equivalent of the series. I’m still hopeful, but Platinum keep picking up other projects, so it is feeling less and less likely, especially given Konami’s troubled relationship with Hideo Kojima now. 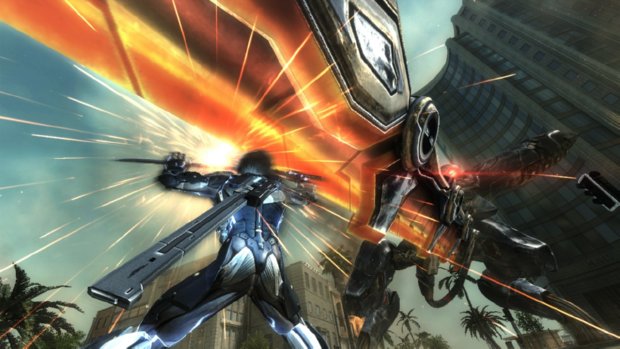 The game has recently been re-released on Steam and it is available on Playstation Now, so check it out where you can, it is a short and bombastic action title which any fan of the genre is sure to enjoy.