Dead Cells is a “rogue-like Metroidvania” title. Yep, that is the best way to describe it. Now, as I have mentioned previously, Metroidvania isn’t a genre which usually gels well with me, the amount of backtracking and time spent looking at a map really puts me off. Except for Hollow Knight of course, because Hollow Knight is the bomb. I think that is the main reason I was slow to pick up Dead Cells, and I’m such a dummy for holding out. Like with all rogue-likes, when you die in Dead Cells, you are booted right back to the start, the only way to get further is to get better. Thankfully there are some leniencies to help alleviate the frustration of a foiled adventure. Methods of traversal such as the ability to grow plants and reach previously inaccessible areas can help make rushing through early parts of the game a little smoother, this is what earned it the label of being “Metroidvania”, however, it really doesn’t feel that way. Upgrades bought with “cells” are permanent too, giving you more options in future attempts. The whole title has a fantastic feeling of progression, and whilst it may feel easy at first, after finishing the game a couple of times, the challenge soon ramps up.

Looking Under the Microscope

Despite the grim surroundings and premise; A shapeless being takes control of a host body to escape an island prison packed with failed experiments and twisted monstrosities, Dead Cells is surprisingly light-hearted. The dialogue and story beats are delivered with tongue firmly in cheek. For example, each time you visit a shop, your character sees a pile of dead bodies and exclaims “hmmmm, these look familiar… Oh”. It’s a breath of fresh air and injects some humour into what could have easily been a depressing slog. The animation of your player character is expressive, reminiscent of a teenager complete with air punches and double thumbs up.

The art style of the game is a weird one to pin down, it looks like your typical pixel art at first glance. However, look deeper and you’ll begin to notice that the character models are actually rendered in 3D. This contrasts with the pixelated backdrops which scroll and scale in layers to add some real depth to the environments. The grim surroundings here are given life the best they can be, however, it’d be awesome to see more biomes and perhaps more unique mechanics for each zone as they can all begin to feel a little samey after a while. This might be something explored in the DLC, but I don’t know yet, I’m probably going to pick it up though, this game slaps.

One Cell of a Good Time

All of this world building and progression is great, but how is the gameplay? Well, this is where Dead Cells truly shines. It easily is the best in the genre to pick up and immediately start having a blast. The pace of each stage is frantic, which feeds into the combat too, being some of the best 2D hack and slash gameplay I’ve experienced.

Each weapon feels powerful and lands with a satisfying crunch, swish or chank. The fact that you can dodge almost instantly, and attack animations are kept short meaning that you can keep whacking your attack button and keep getting that fantastic audio-visual feedback. Each kill is performed with a chunky spatter effect and just the right amount of screen shaking to not be nauseating.

You can access more than just a sword and shield however, you also have access to bows, bombs, traps, turrets and a whole lot more in your arsenal as you begin to unlock more and more weaponry. A whole lot of the fun in combat comes from deploying these traps and experimenting to find combinations which seem borderline broken. It is so satisfying to enter a room, deploy all your weapons and decimate a group of foes in seconds. It speaks to the design of this game that even though these abilities are on cooldown timers, they are so short you barely notice, and use of these are encouraged, not penalised. It’d be so easy for the developers to limit these because of the strength, but they know that is what makes Dead Cells fun, so it’s like “hey, go nuts, have a good time”. 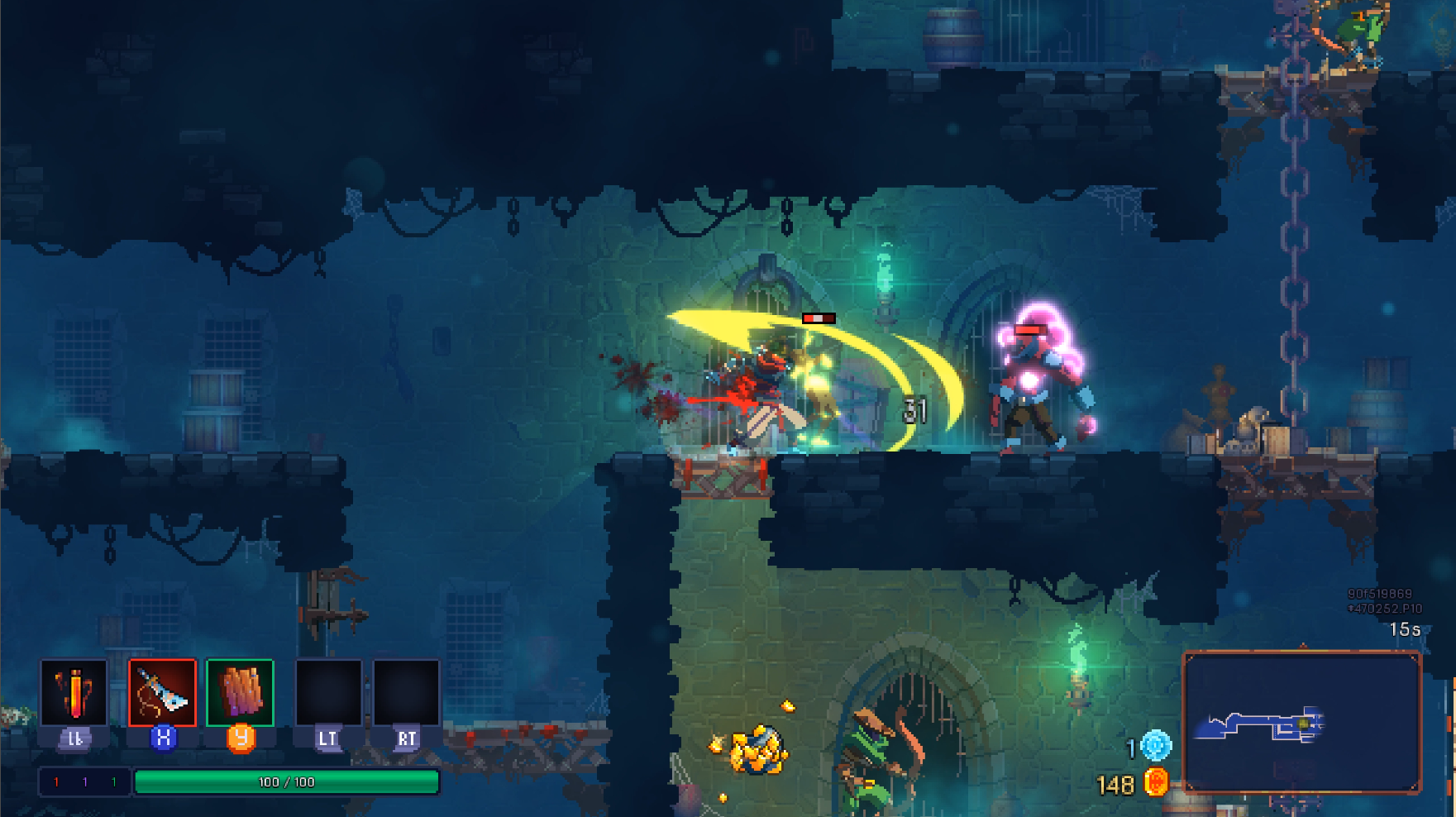 As you battle your way through the island prison, you will uncover scrolls which boost your stats in some way. This offers some customisation and allows your to be reactive to how your build is progressing. With weapons split into 3 categories; brutality, tactics and survivability, you will get to choose which of these you want to grow with each power-up found. Each boost also contains a health bonus, cleverly balanced so that the health given decreases the more boosts in that type you pick up. This means you will often have to balance a larger health bonus against being able to dish out more damage. It is just another way Dead Cells keeps combat interesting and each run feeling unique.

Following each stage you will reach a safe area where you can apply different mutations around your current character build, refill your health flask (Estus style) and buy upgrades with cells which are permanent or gold which will only last the duration of that run. It is also worth noting that this safe area is also full of weird and kooky characters, who are interesting at first, however, the dialogue doesn’t really change, this means that they just become faceless exchanges over the course of 50ish attempts at the game. 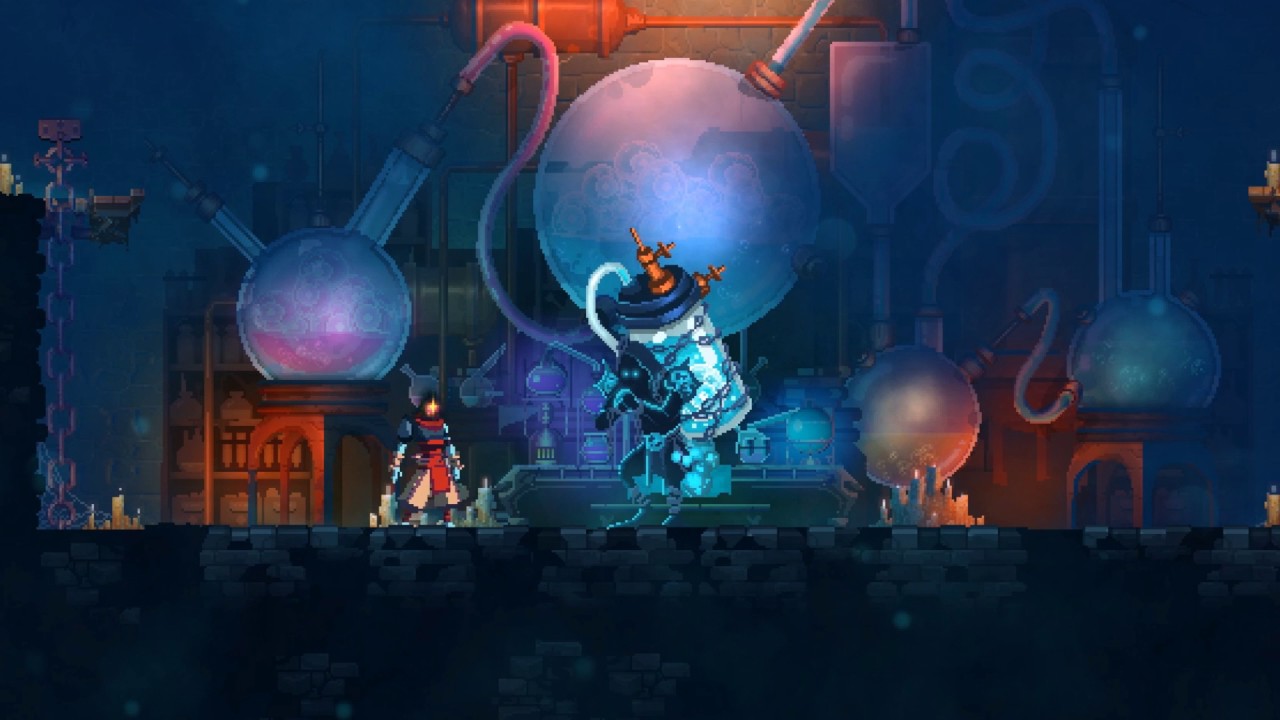 The main draw of Dead Cells and what keeps me coming back time after time is the pace. It is lighting fast and instantly gratifying. Unlike most rogue-likes such as Enter the Gungeon or The Binding of Isaac, Dead Cells is fun from the second you start your run. In the two games mentioned just now, they’re fun, but only later, once you have built your strength, played carefully and put a good few minutes in. Sometimes even longer if there are no good upgrades available which are generated randomly. This pacing still works, but it is a much slower burn before you get to the real action, you beat a few bosses and then the game really starts to come alive. Dead Cells however, BAM, you’re having fun straight away, you’re rolling, jumping, murdering and zipping all over the place. Please see the below super scientific graph whereby I have calculated the “fun per minute” or each of those games mentioned earlier:

It helps that this fast pace feeds into a mechanic which rewards speedy gameplay, the quicker you can do a level, the more likely you are to be able to enter secret areas and gain more goodies. This incentivises fast play and takes the frantic energy of the combat and thinking on your feet to the next level, rewarding efficient play. 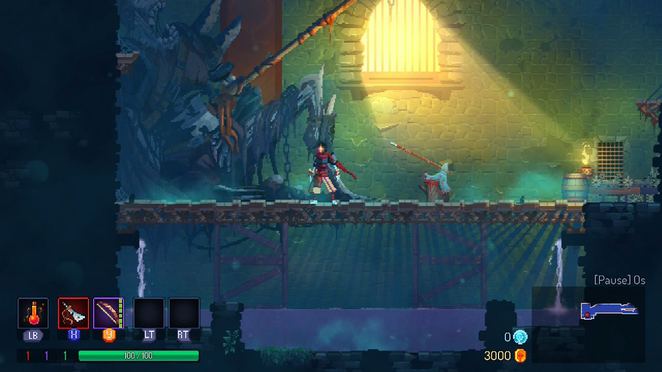 From a musical standpoint, it is serviceable, I mean. Sure, it is good, but there isn’t anything that I’ll go away and listen to, or instantly recognise upon hearing it outside the context of the game.

More than the Sum of its Cells?

Overall Dead Cells is a fantastic package. Take the tried and true rogue-like formula and mix in some of the most visceral and rewarding 2D combat on the market and you have yourself a neat little title that will keep you coming back for more. Now that the DLC and Bad Seed expansion pack are out, it might be worth picking up the “definitive edition” or whatever they’re calling it and saving yourself a few quid, I don’t think you’ll regret it.

It is pretty cheap to be quite honest, couple this with the hours upon hours you could realistically pour into this and you’ve got yourself some great bang for your buck. It is even on Switch now, so yeah, play Dead Cells wherever you are. Play it whilst waiting for your passata to reduce, whilst you have a few spare minutes between train connections, play it in bed on a Sunday morning, do whatever, just pick it up when you can.

One thought on “Dead Cells Review: Great Game in the Membrane”